Sanford On Wilson: It's Time To Move On 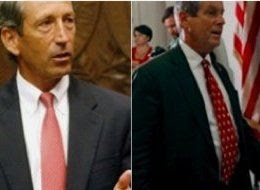 One should keep in mind that for Governor Sanford, moving on means keeping the scandal in the public eye with his "apology tour" of the state. It would be possible to move past the whole sordid mess, if weren't attending every Rotary Club meeting in the state to "apologize."

He's been locked away in the Governor's mansion for seven years (except for a few trips to Argentina) and (fortunately) hasn't bothered to get off of his fanny to promote his own agenda. As a result, he hasn't been able to implement his plans even though his party controls both houses of the legislature. Now that his "base" is calling for his resignation, he starts campaigning to keep the job he hasn't done for seven years.

If Rep. Wilson follows Sanford's "move on" example, he'll be offering his same passive-aggressive non-apology daily from now until next November.
Read the Article at HuffingtonPost
Posted by whoHearer at 10:02 PM