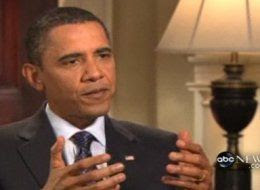 The key word the President used is "overriding." Is race the overriding issue? When this great nation is taken as a whole the answer would be probably not. If you focus certain regions, for example, parts of NC, most of SC, GA, AL and MS (chosen from my personal experience), no doubt race plays a significant role, but it's the same subtle racism the GOP has used to successfully build a majority in these areas and it's not going away.

The overriding issue is that the GOP has come to represent overgrown children who tantrum when they don't get their way. To expect them to enter into dialogue is naive... they simply are incapable, from what I have seen, of entertaining any idea save their own, and will reject their own idea if it's presented by a Democrat. Limbaugh set the agenda in January, "I want to see this president fail." Nothing has changed or will change. If making accommodations to appease them is the path he chooses, he will fail.
Read the Article at HuffingtonPost
Posted by whoHearer at 11:33 AM