Rep. Debbie Wasserman Schultz: The GOP Is 'Hoping For Failure' For The Economy 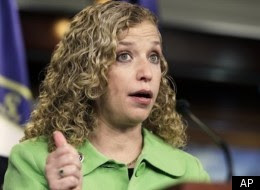 Rep. Schultz was not so much making an accusation as she was stating the blatantly obvious. The reality is, the GOP is not just passively hoping for a worsening economic climate for 2012, they are actively working to make it a reality. By blocking any government action that could possibly benefit the greater economic good of the country they profess to love so much, they are betting on an electorate that is so demoralize­d they will either stay home in November 2012 (as was the case in 2010) or view the GOP as the lesser of evils. It's a cynical strategy, of course, but when you have an insatiable hunger for power and nothing else to offer, it is the only way left to go.
Read the Article at HuffingtonPost
Posted by whoHearer at 4:59 PM