Romney Beating Obama In A Fight For Wall St. Cash 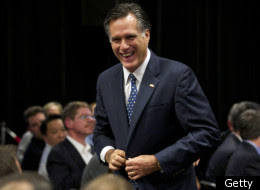 The only reason "Wall Street" backed Obama in 2008 was to make sure they had plenty of paid access to the administra­tion. It was clear early on that the eventual GOP nominee would be the second place finisher in November. The money to Romney now is pretty much the same thing. The only candidate in the GOP field with a possibly of winning in November 2012 is Romney. The others, with the exception of Huntsman, are ideologues who have no hope of winning support beyond the hardcore party faithful. "Wall Street" will back whoever it thinks can win so they can continue buy enough access to maintain their strangleho­ld on progress.
Read the Article at HuffingtonPost
Posted by whoHearer at 4:25 PM