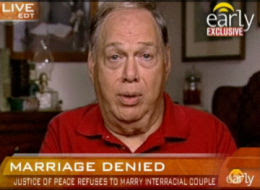 This is the racist attitude: "I'm sorry that I offended the couple, but I did help them and tell them who to go to... I don't see what the problem is now."

I understand him being concerned about the children not being accepted, one of them might become President and end up not being accepted by nearly a third of the country. But that aside, his ignorance is on display with his assumption that an "apology" makes everything alright and leaves him free to repeat the insult over and over again.

He is right about one thing, there is no problem now. The happy couple, in exposing this buffoon, is simply returning his "tell them who to go to" favor by enlisting the support of a few million of their fellow citizens to tell him "where to go."
Read the Article at HuffingtonPost
Posted by whoHearer at 1:26 PM