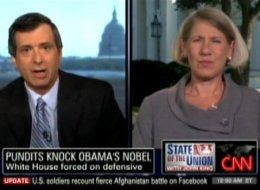 Hear, hear! The White House has called it like it is. Fox News is aptly named. The fox, in fable, is portrayed as sly and deceitful, and Fox News has been sly and deceitful since its founding, a true reflection of the head of it's news division, Roger Ailes. Ailes was one of the architects of the "Reagan Coalition" which completed its coup in 1980, and the god-father of the rabid partisanship that has spoiled political discourse in this country and weakened our republic. Fox News is not, nor has it ever been, a "news" channel. It is a propaganda network, not so much for the Republican Party as it is for the Neo-Conservative movement.
Read the Article at HuffingtonPost
Posted by whoHearer at 4:44 PM