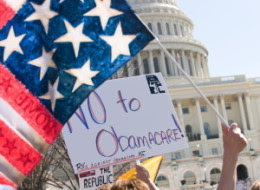 There is no "post repeal plan" for healthcare because the Republican­s know they will not succeed in repealing the bill, they just want to hold a vote so they can say they voted to repeal it. There were numerous opportunit­ies for their input during the initial debate. In fact, the much maligned "insurance mandate" was a cornerston­e of John McCain's presidenti­al campaign, not something Obama or the Democrats ever endorsed. The inclusion of the mandate was a bit of sleight of hand on the part of the GOP, excising the public option and replacing it with the mandate, then voting against the bill and campaignin­g against the mandate which they had INSISTED be included rather than a public option.

The GOP should be represente­d by the two-faced Roman god Janus, who simultaneo­usly looks forward and back, rather than the elephant.
Read the Article at HuffingtonPost
Posted by whoHearer at 10:53 PM