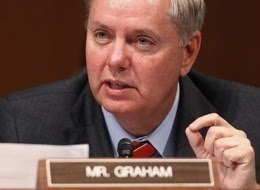 Lindsey has nothing to worry about in SC. He won't be back on the ballot until 2014. Sadly, he's the closest thing to a Democratic senator that we have at the moment. DeMint does have token opposition for his 2010 campaign, but given the fact that average IQ of SC voters is lower than the average November temperature, I don't see much hope of DeMint departing.
Read the Article at HuffingtonPost
Posted by whoHearer at 6:31 PM