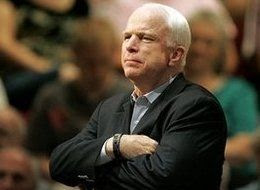 It's a little late for McCain to try to rein in the fear. He should have done more of that when he was stoking the fires last fall. Maybe had he chosen a running mate who was competent and less of a 'playmate,' or maybe if he had some solutions to offer instead of fear and his worn out proposal for a tax credit to buy insurance (which assumes that most people would be able to scrape up $5000 to buy the insurance up front to qualify for the credit... a cost that is greater than two months take home pay for many uninsured families) the outcome of the election would have been different and his position would actually matter.
Read the Article at HuffingtonPost
Posted by whoHearer at 2:26 PM