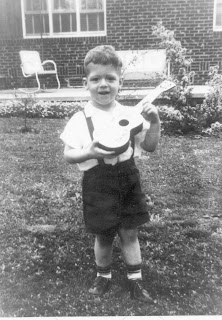 in an earlier post, i described part of the impetus for the research that confirmed my self-diagnosis. what i left out was the moment several years ago when i first realized that i probably had asperger's syndrome.

one afternoon, i was walking through our living room headed to my wife's study. i glanced at a picture of myself as young child and stopped. i stared for a moment at the eyes of the child in the picture. i saw in the eyes of that child the characteristics that i had associated with children on the autism spectrum.

it's difficult for me to describe accurately for someone else what it is that i see. it's a very subtle thing that involves the "focus" of the eyes and the presence of slight dark circles under the eyes. it is easier to point out to someone when they can see a photo of a child with the characteristics alongside a picture of a child without the characteristics. i have a co-worker who has at her workstation a picture of her children when they were young and another picture of a co-worker's child who was diagnosed on the autism spectrum several years ago. looking at the pictures together, i can point to what i see... the circles under the eyes and the almost faraway look in the focus. mom tells me she used to call that the "i've lost you" look.

the realization of what i saw in the picture stunned me. i started doing some research. the more i read the more i saw that asperger's syndrome described my peculiarities more accurately than anything else i had read.

i have known for a very long time that i simply think differently than most people. i have come to accept that and made my peace with it.
Posted by whoHearer at 10:05 AM